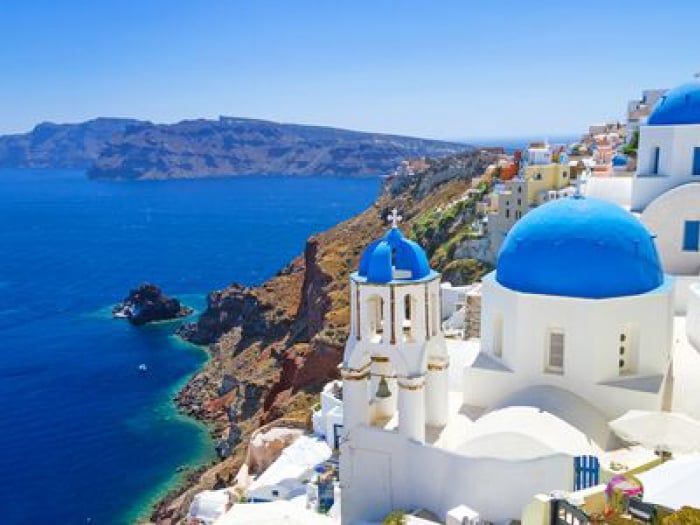 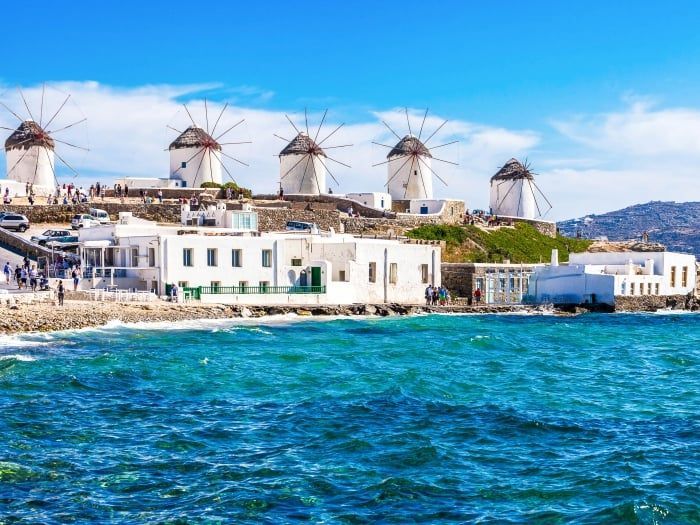 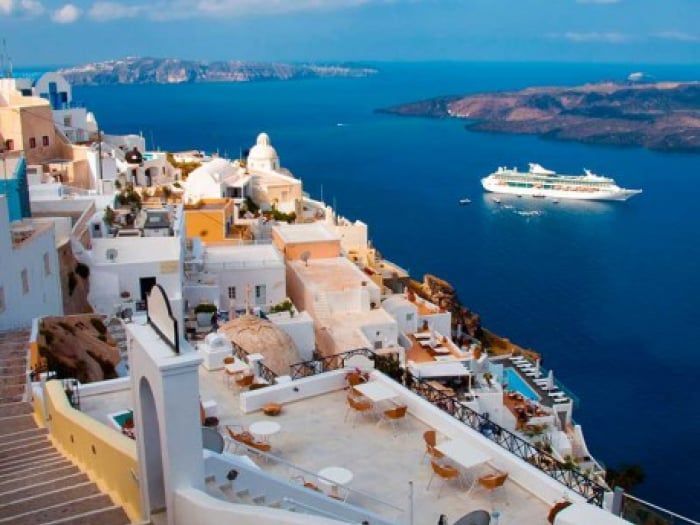 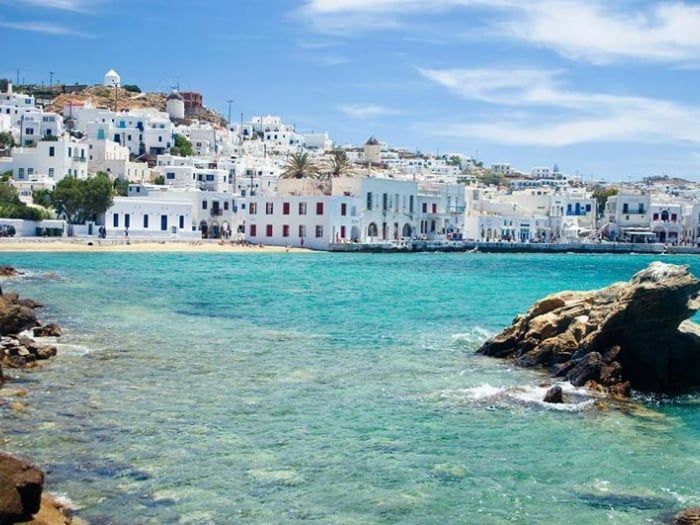 Mykonos is one of several Greek islands that from the small groups of islands called the Cyclades. The nickname for Mykonos is "The Island of the Winds" as it can be windy hence the existence of windmills. The island has approximately 10,000 permanent inhabitants but during the summer season this increases significantly.

The bulk of the island’s income is earned from Tourism as the island is fashionable with vibrant nightlife for straight and LGBT community.

The town centre is simply know as known as Chora (i.e. the Town in Greek) or Mykonos Town to foreigners. You can fly directly to Mykonos from several European airports in the tourist season or connect in Athens and fly via the 2 Greek airlines on to Mykonos.

Alternately you can fly to Athens and take a ferry from Athens to Mykonos. There are high speed catamarans or slower ferries. If you have the time and it is your first time in the Greek islands it is nice to take the slower ferries that stop at other islands on route and you can see them from the ferry.

Depending on where you are stay on the island will determine the options to get around. If you stay in Mykonos town which is close to the bar nightlife then your main need for transport will be to get to a beach during the day which you can go by local bus or taxi.

If you are staying further from Mykonos town then hiring a moped, beach buggy or car might be a much cheaper option than relying on buses or taxis.

From the port there are buses but many of the hotels will pick you up if they know your arrival times for free otherwise you can take a taxi.

From the airport there is a bus to Mykonos town or you can take a taxi. If staying somewhere other than Mykonos town ask to see if one of the buses stops near where you are staying and if not then take a taxi. Some of the hotels have buses so it might be possible for them to pick you up at the airport.

Mykonos has a few hetero-friendly hotels which are predominately gay and several gay friendly places to stay. Generally, as it is a small island very popular particularly in August and September it is best to reserve somewhere to stay and not to arrive on the island.

The gay beaches of Mykonos are located on the southern side of the island and can be access by public bus only or bus and then a boat or directly by driving by taxi or riding a moped.

Elia beach is now the most popular gay beach on Mykonos Island which was not the case some years back. In addition, it is in the top 10 gay beaches of Europe. The sandy beach is well organized with good quality sun shades and sun beds for rent. It has a beach bar and restaurant just at the entrance to the beach to get cold drinks and for lunch etc. On Elia beach nudists are allowed.

Super Paradise Beach used to be the almost exclusive gay beach of Mykonos but has been in recent years become more popular with everybody so the majority of the gay community now go to Elia beach,

Kalafatis Beach is perhaps the longest sandy beaches on the island, and the most remote of all the gay beaches of Mykonos. The location being further away is why if not so popular unless you have hired a car.

The majority of the Mykonos gay bars are located in Mykonos town and in the narrow streets.

Jackie O is possible the most popular gay bar of Mykonos. They have drag almost every evening in high season. It is a two-storey dance bar popular for drinks after dinner. The upstairs terrace is which is relatively small as nice views of the Aegean Sea.

Babylon is the most popular club and next door to Jackie O. It has an outside terrace with lounge seating, but inside is where the main party fun takes place. Every evening during the summer months there is some entertainment, either drag shows, Go Go dancers and another themed event.

Porta Bar is a small popular bar for after dinner cocktails or beers in a narrow street. Guys once served at the bar hang out in the narrow streets close by chatting, drinking and comparing tans of the other customers or guys passing by.

Kastro’s Bar is a small bar popular for pre-dinner cocktails on the picturesque balcony around the time of the sunset. As the bar and balcony are small this bar can get full quite early before dinner.

Elysium Bar is at the Elysium hetero-friendly (but really predominately gay) hotel, famous for its cabaret shows. The views form the bar as spectacular especially as the sun sets. They have other cabaret nights, DJs, GoGo dancers and other themed nights.

The Piano Bar and also known as Montparnasse is a former art gallery converted in to a small gay friendly bar know for the occasional live cabaret shows entertainment.

Typical Greek food is delicious and healthy. Therefore, when you are looking for somewhere to dine look with your eyes to see how the food is present what other customers have been served and how the other customers look before making your decision. There is plenty of choice on the island.

Mykonos is an island full of small boutiques. Many of the luxury brands will be available in one of the boutiques selling multiple brands. In addition to clothing there are lot of jewellery stores on the island.

THE main gay event on the island is the XLSIOR festival which is normally at the end of August or early September which is the most popular time for the gay community to holiday as the temperature is cooler. This festival is summer gay dance festivals with international DJs, hot men and loads of sunshine at the end of the summer season. There is a pool party and several parties at Cavo Paradiso at Elia beach.