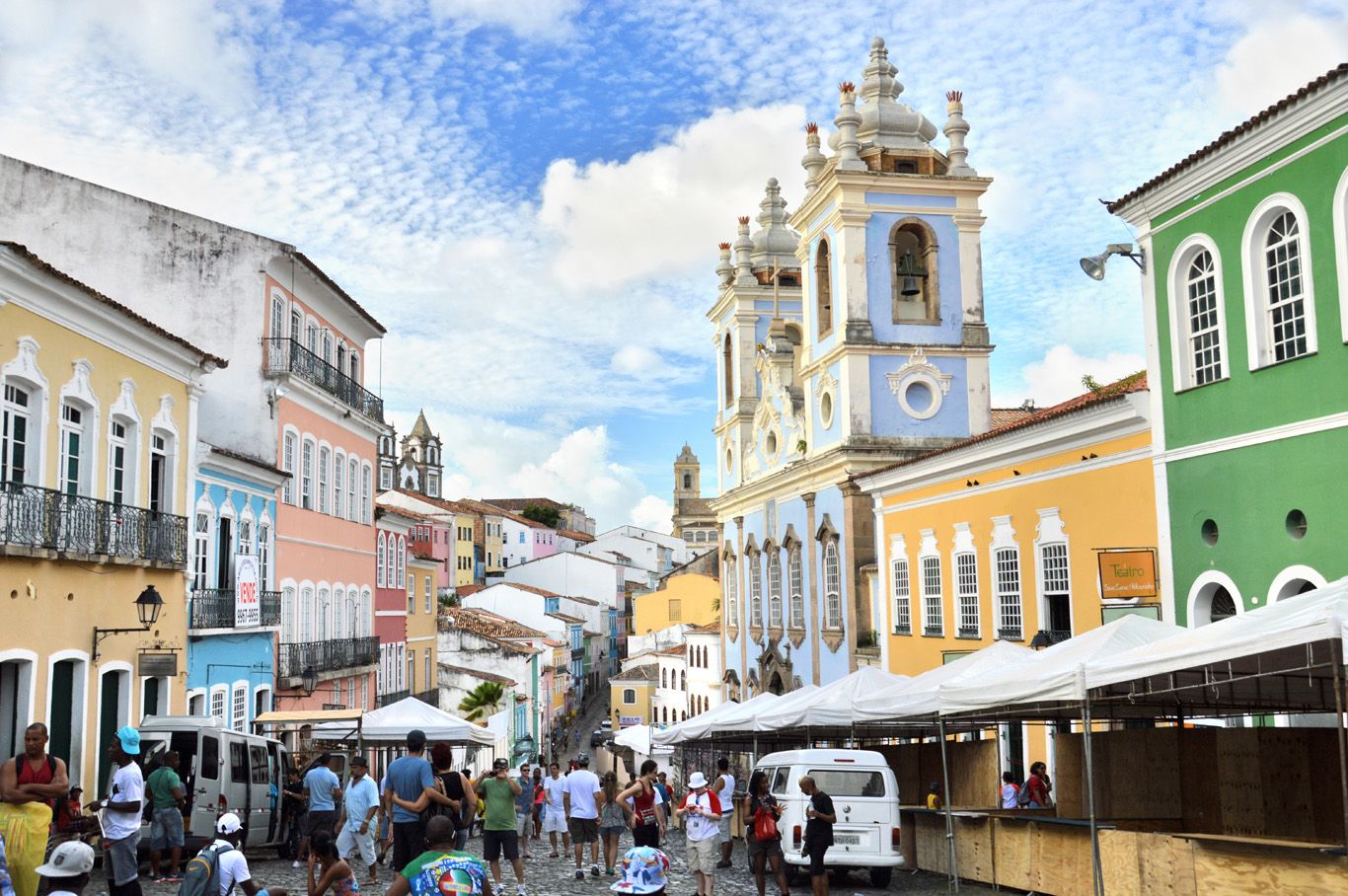 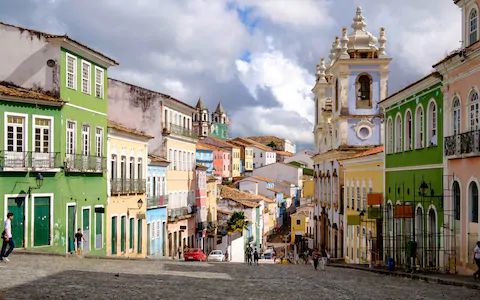 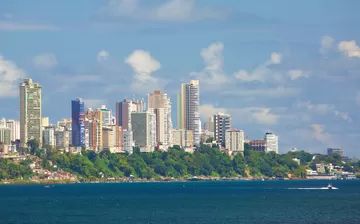 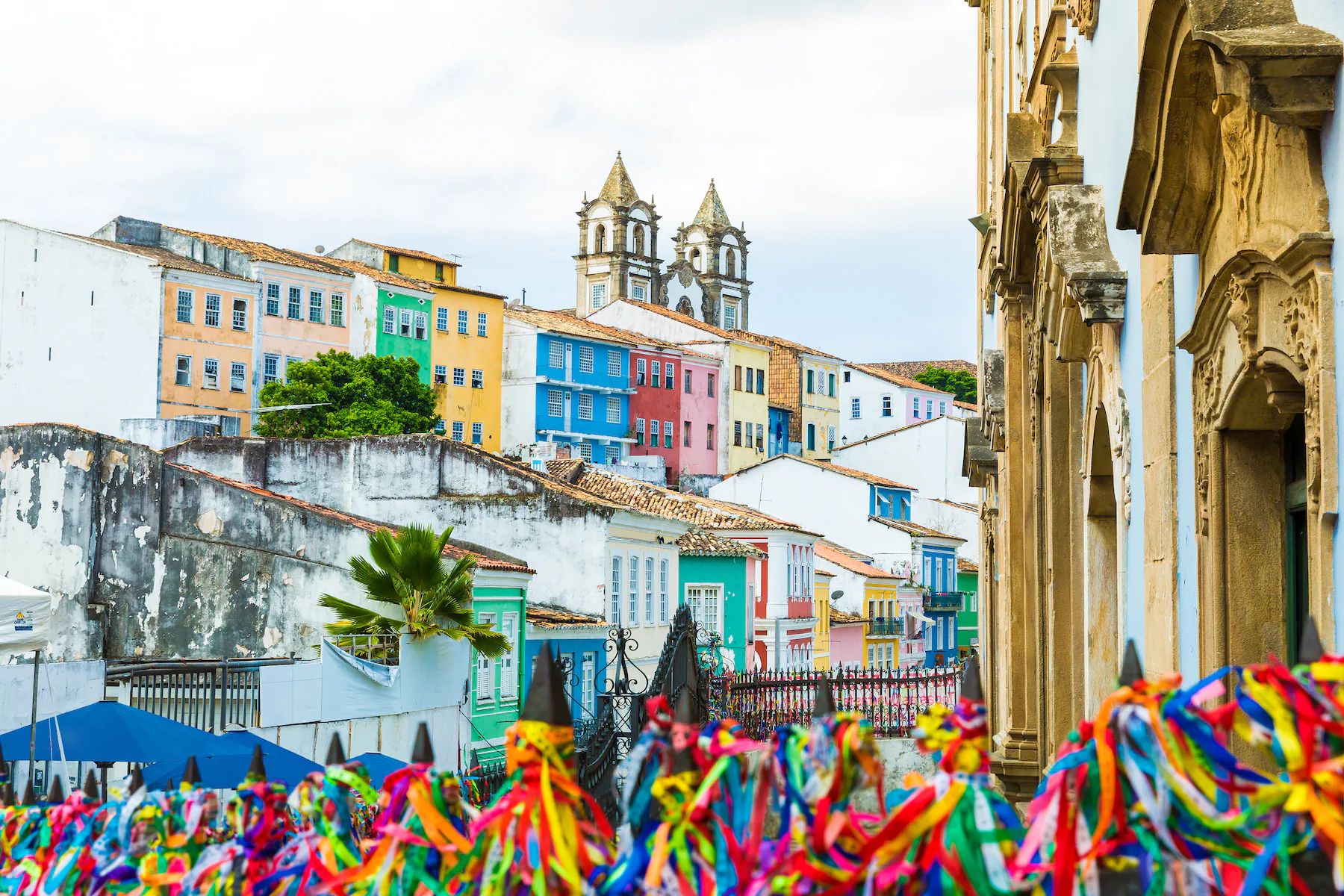 Salvador, the first capital of Colonial Brazil by Portuguese colonization

Salvador, the capital of Brazil’s north eastern state of Bahia, is known for its Portuguese colonial architecture, Afro-Brazilian culture and a tropical coastline.

Salvador has about three thousand buildings built in 18th century on, with highlights for religious, civil and military architecture monuments. As the first capital of Colonial Brazil, the city is one of the oldest in the Americas and one of the first planned cities in the world.

Founded in 1549 by Tomé de Sousa took place as a result of colonization by the Portuguese Empire.

The Historic Centre of Salvador was declared a World Heritage Site by UNESCO in 1985 and as a result of the stage of one of the biggest Carnivals in the world (the biggest street party in the world, according to the Guinness World Records), the municipality to the UNESCO's Creative Cities Network as the "City of Music", a unique title in the country, added to the international recognition of Salvador's music.

The neighbourhood of Barra is the main stronghold for LGBTQ community in Bahia. Rua Carlos Gomes and in this neighbourhood is where many of the bars, cafes, clubs and saunas are to be found.

In Salvador de Bahia, gays are more accepted than in other parts of the world and mix socially with all sectors of the population.

Lesbian, gay, bisexual, transgender and queer (LGBTQ) rights in Brazil are among the most advanced in Latin America and the world.

Gay couples in Brazil enjoy the same rights guaranteed to heterosexual ones since 16 May 2013, including marriage. In June 2019, the Brazilian Supreme Court ruled that discrimination on the basis of sexual orientation and gender identity is a crime the same as racism.

The status of LGBTQ rights in Brazil has grown since the end of the military dictatorship in 1985, and the creation of the new Constitution of Brazil of 1988.

Generally, with the world’s largest gay pride event in Sao Paulo and carnival which is popular in every city the Brazilian popular are generally open minded towards LGBTQ community.

The executive bus service that drops passengers off on route close to most of the major hotels departs from just outside the arrival’s hall. Buses depart hourly with a journey time of approximately one hour depending on the traffic.

The regular buses connect the airport with several places in Salvador including Pelourinho which is popular location for tourists to stay (route Airport-Praça da Sé). The bus stop also departs from outside the arrival’s hall and if you do not have a lot of luggage is much cheaper than the executive bus.

There is a free shuttle to the new Aeroporto station from which you can use the metro (line 2) to reach the city centre. The metro service runs between 5.00 am and midnight daily.

Coometas and Comtas are the two prepaid taxi companies that can be booked from counters located in the arrival’s hall. The cost of a taxi to the centre is expensive compared to public transport cost due to the distance.

There are also normal taxis that use meters, and might be cheaper, however, in case of heavy traffic can work out much more expensive than the prepaid taxi.

Uber operated in Salvador so you can compare the cost to the other taxi options.

The city buses are actually a great way to get around, especially if you’re just visiting the main tourist sites.

The bus drivers are not known to wait long at bus stops as soon as passengers board, so take a seat if available or hold on tight and get ready to hop off quickly once reach your destination.

The first few metro stations were completed for the 2014 World Cup but are located at any of the famous sites, beaches or the airport, so unlikely transport option. More stations are being built to help to reduce the traffic problems of city so might be an option for a future trip to Salvador.

The majority of visits to Salvador are there for the great beaches. Flamengo Beach, although further than the other beaches from the city centre, is less crowded and has calm sea waves. Ideal for those who want to top up their tan, swim and hang out at the beach shacks.

The traditional Porto da Barra is considered the most diverse beach. It is popular with tourists, artists, posh girls and, of course, LGBTQ community. The LGBTQ section of beach is normally concentrated between the middle and the right side of the beach, near Forte de São Diogo.

Praia dos Artistas, in Boca do Rio, is known from the 70s, when it attracted artists and alternatives. The view is amazing, with a calm and attractive sea. The beach is located between the stretches of Armação and Corsário.

Another popular beach with LGBTQ community is Buracao, in Rio Vermelho. It is hidden in a dead-end street and is generally not crowded, even at weekends. It is also famous for the parties that happen sporadically at night.

Farol da Barra Beach fills up on Saturday nights with parties that last until dawn.

Salvador has a huge variety of foods that are recognized as some of the nicest in Brazil. The local Bahia cuisine is focused on typically African ingredients, spice, and based on seafood (shrimp & fish), and is much appreciated throughout Brazil and internationally.

Using milky coconut juice a variety of seafood, based dishes, such as Ensopados, Moquecas and Escabeche are cooked.

The sugar cane bagasse was mixed with molasses and Rapadura, to create coconut desserts like Cocada Branca and Preta.

In the markets of Salvador, it is possible to find stands selling typical dishes of the colonial era.

In the Sete Portas Market, customers eat Mocotó on Friday nights since the 1940s, when the market was inaugurated. In the restaurants of Mercado Modelo, Sarapatel, stews and several fried dishes are served regularly.

In the São Joaquim, Santa Bárbara and São Miguel markets, there are stands selling typical food.

They are also sold at stands located on the beaches, specifically crab stews and oysters.

The restaurants that sell typical dishes are located mostly along the coast and in Pelourinho.

You will be spoilt for choice of food to eat in Salvador.

The neighbourhood of Barra is the main LGBTQ neighbourhood in Bahia. The entire area from Largo Dois de Julho to Campo Grande, including Rua do Faísca (street) and Jardim da Piedade.

Carmen Lounge Bar has two rooms and a view of the street, with drag queen performances every day. Address Avenida Carlos Gomes, 860. Open Tuesday to Sunday from 8:00 pm until late.

Sailor's Anchor is a traditional bar that have Bahian drag shows. The small space typically fills up after midnight. On stage, the drag queens perform with Brazilian songs and the international diva’s music. Address: Av. Carlos Gomes, 808. Open Tuesday to Sunday from 9:00 pm to 3:00 am.

Gastrobar Tropes is a bar that serves food. The relaxed atmosphere is completed with alternative shows. On Saturdays, the bar gains an LGBTQ face when Drag queen DesiRée Beck is in charge of the programming and usually hosts other drag queen performers as guests. Address: Rua Ilhéus(street), 214, Rio Vermelho. Open Thursdays and Fridays from 6:00 pm and on Saturdays from 7:00 p.m until late.

San Boate, is the best-known LGBTQ nightclub in Salvador and tends to please all kinds of audiences. With five spaces, an external bar, a kind of lounge, two dance floors and a VIP area. Address: Rua Conselheiro Pedro Luiz(street), 488. Open Thursdays - Saturdays and the eve of holidays, at 11:59 pm.

Carnival in Brazil is popular with most Brazilians held annually at the end of February or early March depending on the dates for Easter is popular with the LGBTQ community.

The Bahia carnival of is considered one of the best in Brazil. The annual gay carnival takes place in February on the 'Praça Castro Alves'.

The Salvador Gay Pride event is typically held in September each year.